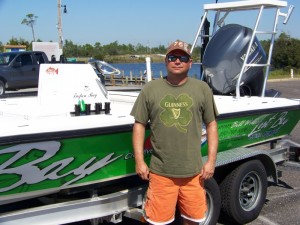 Today i had the privledge of fishing with Rob Marshall, Rick Pickett and Mike Love from Indiana. We started our trip at 5pm and were able to land a few White Trout and some exotics in the first hour on a spot i code named “Ribbonfish Hole.” We headed East for spot number two as the sun began to set. Spot two has been code named “OMG” due to the amount of White Trout. When the guys started fishing this spot i couldnt keep up on fish going in the icebox and baiting hooks. There were times they were bringing me three at a time. After wearing the Captain out for about an hour we headed for several other spots to catch some Speckled Trout and Redfish. Several small Redfish and Trout were caught and released and a decent Trout went to the icebox. Total fish kept was close to forty.  As always this time of year everyone was able to catch some really nice Ladyfish that put on a show with their arial acrobatics. All three fella’s were great to fish with and i really enjoyed spending the evening watching them lay the Smack Down on the White Trout. Due to the frequency at which fish were coming to the boat i was not able to get as many pictures as i would’ve liked. Water temp was 73.1. 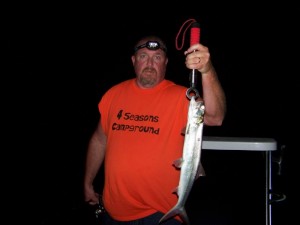