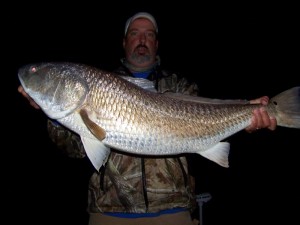 This evenings trip wasnt with a client but it was a very special trip. Both of my boys have a love for the outdoors and share my passion for fishing and its trips like this one that fuel that passion. The night started off slow but finished strong. With strong winds out of the Southeast we put the Tarpon Bay 21 to the test when we crossed Pensacola bay. We arrived at destination 1 before midnight and were waiting for the tide to turn and start heading out. After giving destination 1 a chance to produce a Bull Red we were off to the next spot. As Johnny and i fished around looking for that big boy it gave Capt. Dad a chance to talk about life, girls, friendships, Facebook and of course why fish do the things they do. Unlike the song, he’s old enough to know we weren’t “Just Fishin” but for a teenager he listened like a champ. Now that Johnny has his boaters safety card he is very eager to learn all he can about handling the boat, working the electronics and why we do some of the things we do on the boat. As we went to our next spot we were both watching the bottom machine and were taking notice in the drastic depth change in this small area we were about to fish. After we got the boat in position and casted to the down current side of the ledge, it was just a few minutes before the drag was peeling and i was smiling like a mule eatin’ briars. After a great fight the fish was landed, measured and photographed before a successful release. With a broke clavicle from a recent  Football injury Johnny was not able to hold his fish up enough to show how big he really was, so Capt. Dad got his picture with the 39 1/2 inch bruiser. Our water temp at midnight was 60 degrees. 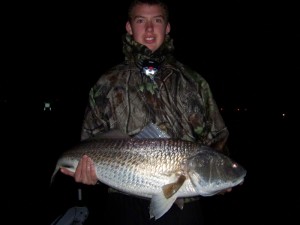