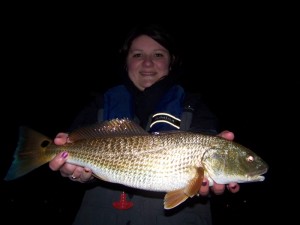 Tonight i guided Captain Jack Uxa and his wife Angela for Trout and Redfish. Angela started the night by saying “I don’t fish much.” With that i thought we were going to spend some time mastering her cast to be able to effectively fish the dock lights without a bunch lures landing on boats, jet skis and other miscellaneous backyard water toys. I quickly leaned that when the wife of a long time charter Captain says she doesnt fish much that is not the same as the rest of my clients stating the same thing. This lady would have given Kevin VanDam a run for his money. Her perfect casting quickly resulted in drag pulling Redfish, Speckled Trout and countless White Trout. Now with all that said you can imagine how effective her husband was with artificial lures rigged weedless just like he uses to conquer Largemouth Bass on Lake of the Ozarks in Missouri. During the course of the trip Angela landed her first ever Redfish and Jack caught his first Speckled Trout and once that happened i just got out of the way and watched from the end of a landing net. Captain Jack is a recognized tournament angler with a list of sponsors including Pure Fishing who is the holding company for some of the biggest names in the industry such as Penn, Berkley, Sebille and others. I had a blast sharing tips and techniques with him and was glad that i got to be a part of their vacation on the coast. Water temp was 57 degrees and all fish were caught on artificial baits before being released.