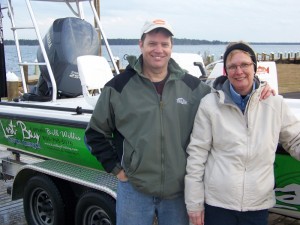 Today i guided Scott Macdougal and his wife Jody from Lincolnshire Illinois for some back bay Trout and Redfish. Water temp (51) was several degrees cooler than the previous trips due to one super cold night. We got started around10 am and were met with really strong winds out of the Southeast. The Tarpon Bay 21 handled the bay like a champ and we were on our spot in no time. Scott started the morning off with the flat part of his slam by landing two nice Flounder right off the bat with his weedless artificial bait. Shortly after scott landed his second Flounder the winds began to get even stronger so we headed back across the bay in search of a shoreline that was protected from the wind. Once again Scott hooked up quickly and had Speckled Trout (Toothie critter #2) coming to the boat. For his final act and to me and Jody’s amazement Scott hoisted in a Sheepshead(Toothie critter #3). The day was full of good conversation, Trout, Flounder and Sheepshead but no Redfish. I was glad i had the opportunity to spend the day with a couple that was fishing on the day before their 25th wedding anniversary. Scott and Jody thank you for choosing Lost Bay Guide Service and i look forward to fishing you again soon. 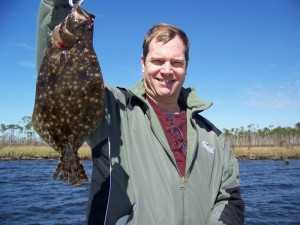