Last night i guided Ronny Ball and his son David from Kentucky for some Trout and Redfish action. This morning my scheduled trip cancelled and shortly after returning home i received a call from Mr. Ball. He wanted to know if i would be able to take his wife Ann and son David to try the Trout and Redfish action. I moved them in to the previous clients slot and off we went. The fishing was SLOW for the first couple hours before the Trout decided to participate. After finding the Trout and starting to put a few in the box i was feeling a little better about our chances at landing a few big ol’Redfish. The tide was starting to increase and as we got closer to the top of the tide the Redfish decided to join the party. When Ann felt that first Redfish doubling her rod in half and screaming drag i think she realized why Ronny had wanted her to experience this light tackle, artificial bait, inshore action. Her first oversize Red was just a warm up for the big boy she tangled with next. Arms shaking and knuckles turning white as the Redfish was trying to make the rod touch the water Ann did a great job pulling the rod back with all her might. When the giant finally decided to surrender to Ann , i was able to get her in the net and then quickly take a few pictures before releasing her to fight again another day. The big Red had another line hanging from her gills when i landed her and we soon noticed there was another lure in her mouth from someone else who had felt her power for a few moments. When i occasionally find a lure like that in a fish i often wonder how that came to be. Was it a bad knot? How long did they fight the fish before it was lost? Did they get to see the fish? Earlier this week i fished with Doug Bean and he had a monster Redfish at the boat and as i went to net her my worst nightmare happened, you guessed it she flipped when she should have flopped. That was the first time i lost a clients fish at the boat that i felt 100% responsible for and i could not have felt worse. Doug was a great sport about it and i’m sure we will get him another big fish soon. Ann was great to fish with today and David i’m sure was glad to have had the opportunity to fish with both her and Ronny. Lots of trips booked for the coming weeks so stayed tuned to the Captains Journal. 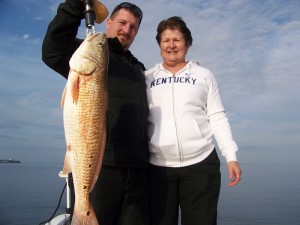