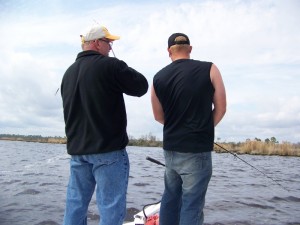 Today i was able to guide Dwight Jarose his wife Julie and son Ben from Nebraska. This will be a day not soon forgotten by Lost Bay Guide Service. After some negotiations with Dwight on our start time we settled on the crack of daylight for some 7:30 am. Dwight assured me that based on his research this was the peak time to begin a quest for the fish. The morning action began pretty quick for some (Ben). The Speckled Trout bite was pretty steady for Ben and i and we were pleasantly suprised with Julie landing a Flounder during the Trout action. I was starting to get a little nervous about Dwight not catching anything when he eased my mind by saying ” What kind of father and husband would i be if i caught all the fish.” With that said Ben, Julie and i continued to land Trout and an occasional Flounder. After enough fish had been brought to the boat by the three of us Dwight decided to show us how it was done. On his command we all stood and watched as he landed his gigantic (As he describes it) Speckled Trout. When it entered the boat we all thought about putting on life jackets but i was able to keep us all safe by turning on the bilge pump. All future clients will be glad to know that the Jarose family were great conservationist and chose to release all of the fish that were caught so the gigantic Trout is still lurking among the stumps. As the trip neared the end Dwight thanked me for taking him to such a remote area so that he could fish in peace without the presence of the paparazzo. As you will see in the first photo Dwight spent most of his day sharing his knowledge. I had a GREAT time with the Jarose family and look forward to fishing with them in the future.  They kept me laughing for six hours and i’m sure the next time will be just the same. Also Dwight was kind enough to let me know the water temperature was 60 degrees. Jarose family thank you for choosing Lost Bay Guide Service and i promise if i’m contacted by the media, producers of reality shows or the Outdoor Channel your secrects are safe with me. 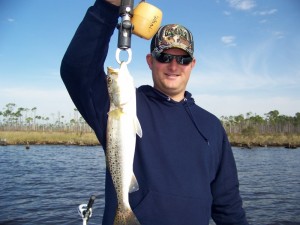 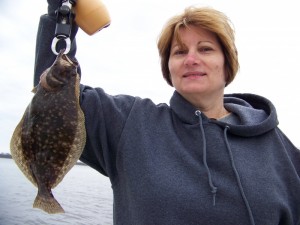