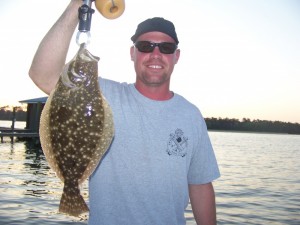 This afternoon i guided Ryan and Skyler Ford from Michigan for some back water action. With a full tide pulling strong and peaking around 8pm i felt really good about getting the guys on a variety of fish.  Both anglers are very experienced and fish a tournament trail back home for both large and smal mouth bass. After getting use to the bite of the finicky Speckled Trout the fellas waisted no time boating several nice fish. Neither Ryan or Skyler had caught a Redfish or Speckled Trout before and Ryan had only landed one small Flounder years earlier fishing in south Florida. A nice Flounder was landed just before sunset and the toughest part of their slam was out of the way. After watching the sunset we began to concentrate on fishing the dock lights with our artificial baits and it wasnt long and the first Speckled Trout was in the box keeping that Flounder company. Thats two out of three the guys have out of the way and now are looking for a Redfish to complete the slam. The toughest part of the night was watching as Skyler was hooked in to a really big fish and as i went for the net i heard those three words again “He got off”. We were all disappointed but it wasnt long and Skyler made up for it with the Redfish that was needed to complete the slam. I had a blast fishing with these guys and look forward to seeing them again soon in the woods or on the water. Ford brothers Thank You for choosing Lost Bay Guide Service. More trips scheduled for this week so stay tuned to the Captains Journal to follow the action. 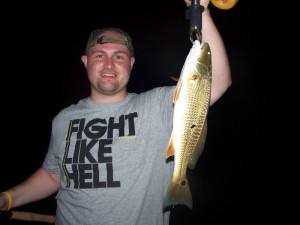