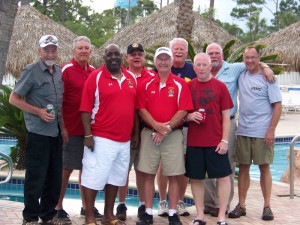 With over a years worth of anticipation and planning for the USMC Sniper Reunion the morning was finally here. Todays charter was with Louie Mackey and Reid Young who were part of the reunion that brought all of these heroes together in Perdido Key, Florida. Louie and Reid served together in Vietnam and though they were close friends they lost touch after the war and had not seen one another in over 43 years prior to the reunion. I can’t put in to words what it was like spending six hours with these two guys and listening to stories of the pranks that were played to pass time as well as the hell they endured in the field. Humble does not begin to describe a man who is line to receive a Purple Heart and descreetly removes himself from the line after seeing fellow Marines with far worse injuries. I could spend hours writing about the two days i spent with this group but i know for most frequent readers of the Journal your ready to know how the fishing went, so here it is. The evening before our trip i called to set up a meeting time and place and as always due to the daylight bite being so good for topwater i asked ” How early can the you wake ?” With just a short pause on the other end of the phone i thought to myself, did you really just ask a Marine Corps Sniper how early can you wake knowing full well that he could go a week without food or water if he wanted to much less missing a few hours of sleep. Before i could kick myself the same soft humble voice that i heard in all the men said “Early won’t be a problem. Where would you like to meet?” This conversation was with Jack Philbrook the Marine that gave his spot up on the boat so the two friends who hadn’t seen each other in so long could spend the day together. Jack was gonna drive my two anglers to the meeting spot and he saw no problems with 4:45 am. The next morning after a brief introduction Louie and Reid jumped in my truck and we were off to the ramp. After arriving at the first spot just before daylight i gave the guys a quick overview of how to best work the topwater plugs and what our plan of attack was going to be like. I hadn’t even put the trolling motor in the water when i hear a big topwater crash on Louie’s bait and yes it was his FIRST cast! Over the next couple hours the guys worked the Speckled Trout over pretty good so we decided to change baits and hit a new spot. The next couple spots produced more Trout and a few smaller Redfish. Before the trip was complete the fellas switched to Spoons and were able to locate some bigger Redfish and more nice Trout. Total Trout landed was 30+ along with 6-8 Redfish. After all the fish were cleaned Reid did a fantastic job of frying all the fillets for his fellow Marines and their families. It was a quite a spread of food that all of the wives had prepared to go with the fish and hush puppies. 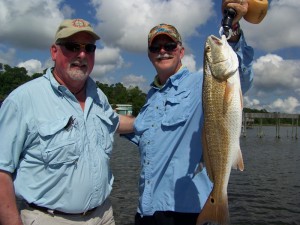 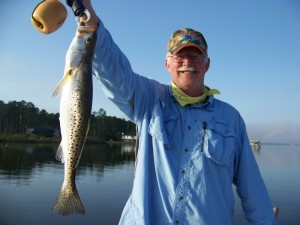 It was an honor to spend time with this group of heroes and i will be forever changed because of the stories they shared with me of a time they refer to as “Just doing our job.” All i can think when they refer to it that way is we have Alaskan Crab Fisherman, Survivor, Americas Dirtiest Jobs and several othe reality shows that depict a tough way to make a living. Because of the fact these guys dont look for recognition it’s unfortunate the world will never get to hear about the things that men like Chuck Mawhinney and Randy Josey did for our country. To all the Marine Scout Snipers “Thank You” for the sacrifice you and your families have made so others could live in safety. 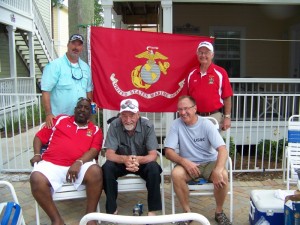 I have never had a Journal that had credits at the end but i’ve also never had one that was so deserving. Below is a list of the Marines that allowed me to be part of their reunion.