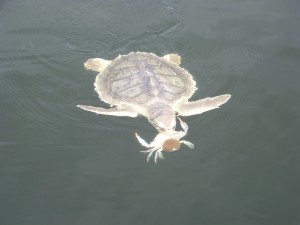 Today i was able to fish with the CEO of Fayards Marine Fabication, Mark Fayard. Mr. Fayard and i hit the water before daylight and caught some small Trout in the dock lights with Artificial Shrimp. As the sun started to rise we drifted across the grass flats following the schools of small Mullet. Making long cast across the schools of bait with a Gold Spoon produced a nice Bluefish rather quickly. Before leaving the flats Mr. Fayard had several strikes at his topwater Chugger and was able to land a nice 23″ Redfish on a Super Fluke. The bait thinned out so we left and headed for the Pass. After a quick stop for bait we were ready to go with a livewell of Bull Minnows, Finger Mullet and Pinfish. We made a few drifts with the outgoing tide resulting in small Red Snapper, Sharks and more Bluefish action. With the tide at a stand still we decided to call it a day. Mr. Fayard is a good friend and his Fabrication skills have helped Lost Bay Guide Service be able to provide a safe and comfortable trip for the clients. Resembling Larry the Cable Guy he is quick to tell you that Larry says “Git-R-Done” and he says “Git 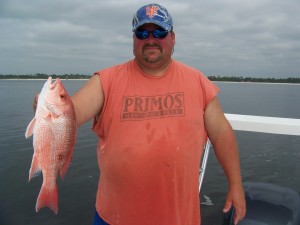 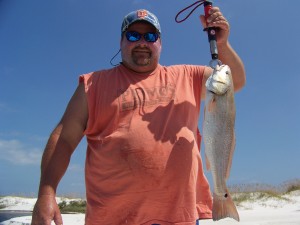